Have you heard about Solar Decathlons? College teams build energy-saving homes for a biennial competition, organized by the U.S. Department of Energy. Afterwards, many houses become residences or are available for tours.

Vienna University of Technology students built a beautiful and energy-surplus home. They plan to make this winning model commercially available to urban and rural customers, starting in Austria. Here’s a quick tour. 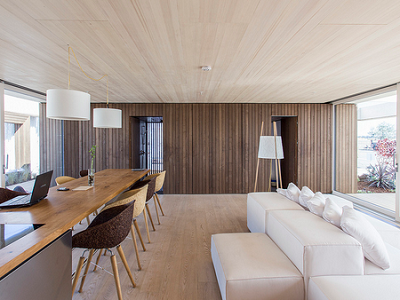 Vienna students created a Mad-Men type of great room, with areas for cooking, dining and hanging out. (DOE 2013)

A sustainable, upscale looking bathroom has been installed in the Austrian prototype home. (DOE 2013)

There is nothing flashy about the Decathlon winner’s private and cozy pod space for sleeping. (DOE 2013)

The U.S. Solar Decathlon has been held six times, first in Washington, DC and lately in Irvine, CA. Let’s take a look at special homes over the years, including their post-competition whereabouts.

Fortunately, Decathlon archives are open and accessible. To start, we suggest clicking on a year below. You might pick a college and read about its home, or else select one (of 10) contest categories and compare homes.